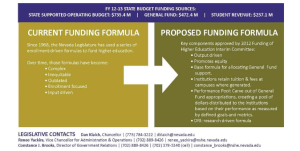 There are two aspects of the new Nevada higher education funding formula that will contribute towards a stronger demand for international students.  The first involves how Nevada college and university revenue will be calculated.  The traditional formula was based on student enrollment (colleges received funding based on the number of students who enrolled in courses).  The new funding formula is based on student completion rates (colleges receive funding based on the number of students who pass their courses). This change means that colleges and universities only get paid if the students are successful and pass a class.

This is a good change if Nevada’s colleges have high performing students who pass all their classes.  Unfortunately, research demonstrates that this is not always the case.  Out of seven public colleges and universities and a handful of private colleges in the state, in-state (resident) students only demonstrate approximately 50% graduation rates within 6 years; whereas, non-resident aliens (out-of-state/international) students demonstrate approximately 70% graduation rates.  This means that the Nevada System of Higher Education (NSHE) will collect approximately 20% more revenue from international and out-of-state students.

Remember, higher education is a business.  If international students bring in more out-of-state tuition/revenue and are more likely to pass their courses (hence, more money), colleges and universities will undoubtedly favor and invest in international student recruitment, retention, and graduation.  This is a significant change for Nevada since for many years institutions have under-appreciated the vast diversity and globalization benefits that international students contribute to campuses and communities.  Hopefully, the unintended consequences of this new funding formula will ultimately stimulate greater research, cross-cultural support services, and international partnerships in Nevada.